Find out about the Centre for Natural Material Innovation's proposals for timber skyscrapers, which were exhibited at the Royal Society's Summer Science Exhibition in early July.

Recent innovations in engineered timber have laid the foundations for the world’s first wooden skyscrapers to appear within a decade, a feat that is not only achievable — according to the Centre for Natural Material Innovation — but one they hope will beckon in an era of sustainable wooden cities, helping reverse historic emissions from the construction industry.

The research team based at the Department of Architecture, is interdisciplinary, composed of architects, biochemists, chemists, mathematicians and engineers. Together, they specialise in plant-based material, including cross-laminated timber, arguably the first major structural innovation since the advent of reinforced concrete, 150 years ago.

The culmination of their five-year research project was on show for a week in early July as part of the Royal Society's Summer Science Exhibition in London (1 to 7 July 2019), illustrating how sowing seeds for timber skyscrapers can rewind the carbon footprint of the concrete industry.

Principal Investigator Dr Michael Ramage, said: “Until cross-laminated timber, there was simply no building material to challenge steel or reinforced concrete. To construct cities and indeed skyscrapers, we just had to accept the good and the bad of existing materials.

“Concrete is about five times heavier than timber, which means more expense for foundations and transport; it’s resource-intensive, and contributes to tremendous carbon dioxide emissions. After water, concrete is the most consumed material by humanity. But now we have an alternative, and it’s plant-based.”

The team envisage trees supplanting concrete as the predominant building material for cities, with buildings sown like seeds and cities harvested as crops, a way of simultaneously addressing climate change and global housing shortages.

Dr Ramage explained: “In England alone, we need to build 340,000 new homes each year over the next 12 years to accommodate our population. Concrete is unsustainable. Timber, however, is the only building material we can grow, and that actually reduces carbon dioxide. Every tonne of timber expunges 1.8 tonnes of carbon dioxide from the atmosphere. Doing the calculations, if all new English homes were constructed from timber, we could capture and offset the carbon footprints of around 850,000 people for 10 years.

“The sustainable forests of Europe take just seven seconds to grow the volume of timber required for a three-bedroom apartment, and four hours to grow a 300-metre supertall skyscraper. Canada’s sustainable forests alone yield enough timber to house a billion people in perpetuity, with forested trees replenishing faster than their eventual occupants.”

Various teams around the world are hoping to produce the tallest wooden skyscrape; however the team from Cambridge is confident they’ll be the first, having done holistic work on three proposals for timber skyscrapers in London, Chicago (USA), and The Hague (Netherlands), all of which were showcased to the public at the exhibition earlier this month.

The team’s exhibit, 'Timber towers of tomorrow', embodied their vision, the stand itself modelled after a typical apartment nested within their proposed Oakwood Timber Tower at the Barbican Tower. Visitors experienced life in a treehouse while talking with the team, viewing architectural models of timber towers, learning about the fire performance properties of engineered timber, and hearing about the genetic, cellular, and macroscale innovations which have led to 'ply in the sky' designs becoming a reality.

Beyond tackling climate change and promoting sustainability, the team are eager to outline the branching benefits society stands to gain by embracing timber architecture: the psychological well-being that comes from being surrounded by wood as compared with concrete, as well as the return to an ancient building material, that’s intimate as it is natural. 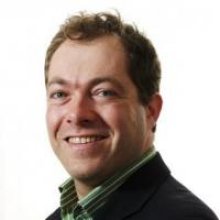 Hear more from the Centre for Natural Material Innovation's Dr Michael Ramage at Alumni Festival - check out his lecture 'Skyscrapers: the Next Generation' at 1pm on Saturday 28 September.

In addition to leading the Centre, Michael Ramage is an architectural engineer and Senior Lecturer in the Department of Architecture. He is also a Fellow and the Vice-Master of Sidney Sussex College, and a founding partner of Light Earth Designs. He studied architecture at MIT (USA), and worked for Conzett Bronzini Gartmann in Switzerland prior to teaching at Cambridge.

More about the event >

This story first appeared on the University's research news webpages in the week of the exhibition.