'Bundestag' (cropped) by Michael Pollak via Creative Commons BY 4.0

The Cambridge DAAD Research Hub for German Studies has just completed its second highly successful year with a symposium on 'Democracy Today: Lessons from the German Past and Present'. The event, run in conjunction with the German Historical Institute Moscow, brought together leading experts from the US, Canada, Chile, the Netherlands, Germany and Russia for three days of discussion in Cambridge. At a time when Angela Merkel was being described as the leader of the free world, its aim was to look beyond the obvious nadirs of German history over the last century to discern the reasons behind the triumph of German democracy.

Key ingredients were readily identified. The post-war period's reluctance to tamper - as encapsulated in the CDU's 1957 campaign slogan 'Keine Experimente' - could now stand for the country's electoral habitus in general. There is no better German election than a boring one. Then there is the importance of financial stability: the long shadow of Weimar's hyperinflation has formed a tight connection between fiscal security and democratic equilibrium. The ability to remember and come to terms with the past have been equally important. It was not until the screening of the US mini-series Holocaust in the late 1970s that a full and widespread reckoning with the past took place. It is one that still holds and accounts for many German actions today, right down to Merkel's admission of hundreds of thousands of Syrian refugees in the summer of 2016, which most likely led to her party's poor performance in this autumn's election, the complications over forming a government, and the rise of the populist right-wing Alternative für Deutschland (AfD).

Contributors have been captured in a series of specially recorded podcast conversations, hosted by Sony Award-winning radio producer Vince Hunt. The first features Germany and Holland's leading academic experts on the theme of Democracy, Paul Nolte (Freie Universität Berlin) and Ton Nijhuis (Duitsland Institut Amsterdam) discussing, among other things, the threat or lack of it from the AfD. The podcasts contain views from around the world, as well as topics not immediately associated with the central theme. For instance, Annette Timm (University of Calgary), one of the world's leading experts on the history of sexuality, discusses what the Nazi past has to tell us about decency, democracy, and sex.

Listen to the podcasts

The Democracy event is one of over 30 the Cambridge Research Hub hosts each year. The Hub is generously supported by a €1 million grant from the Foreign Ministry of the Federal Republic. Under the directorship of Professor Chris Young and Professor Sir Christopher Clark, it began its work in January 2016. In its first year, it attracted some 585 guests - 332 from the UK, 148 from Germany, and 105 from many other countries, from Mexico to Australia. Figures for 2017, not yet finalized, are comparable.

The Hub aims to support research on Germany from all disciplines across the Arts, Humanities and Social Sciences. Cambridge can claim to have the greatest concentration of expertise on German topics outside the Federal Republic itself. Colleagues have certainly stepped up, with the Hub now hosting events and exchanges from the archaeological pre-history of the German lands to the current immigration crisis. All these topics are summarized on its website: www.daad.cam.ac.uk

As Neil MacGregor, former Director of the British Museum and patron of the Hub, observes: 'Germany has shaped the world in which we live and influenced the ways in which we think about, experience, and seek to change it. The gains in knowledge the Hub will bring', he adds, 'can only enrich and strengthen the ties that bind Germany and the world'. 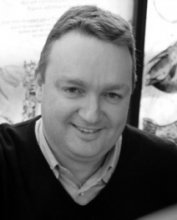 In addition to directing the Cambridge Research Hub with Professor Sir Christopher Clark, Chris Young is Head Elect of the School of Arts and Humanities, Professor of Modern and Medieval German Studies and a Fellow of Pembroke College. His primary teaching and research interests lie in medieval German literature and language and the history of European (and in particular German) sport.

In 2018, he will be Visiting Professor at the Institute for Contemporary History and then Honorary Fellow at the Historisches Kolleg in Munich.

He is co-founder and editor of de Gruyter's new series Companions to Modern German Culture, of the University of California Press’s series Sport in World History, and is a member of the editorial team of the Zeitschrift für deutsches Altertum.