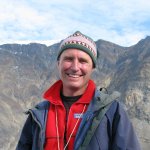 For over 40 years, Professor Marc St-Onge has been working in the circumpolar Arctic region and worldwide, both as an Officer and Project Leader at the Geological Survey of Canada and as Senior Research Fellow at the University of Oxford. Professor St-Onge has lead field science expeditions to study unknown or little-known destinations and phenomena in remote parts of the world, from the Coppermine River area in the western Canadian Arctic (where he and colleagues discovered the oldest rocks in the world) to Banks Island, the Keewatin, northern Quebec (where he and his students discovered and mapped the oldest vestiges of oceanic crust in the world), southeastern, southwestern, central and northern Baffin Island, western Greenland, northwest Scotland, the Himalaya of Pakistan, India and Nepal and the Tibetan Plateau in China (many of these with his colleague and co-Trip Scholar Dr. Owen Weller). His documented contributions to scientific exploration and geological field research are evidenced by the publication of over 125 journal articles and reports, and 119 geological maps (a record at the Geological Survey of Canada).

He was appointed Senior Research Fellow at the University of Oxford in 2004, Fellow of the Royal Canadian Geographical Society in 2010, Vice-President (North America) of the Commission for the Geological Map of the World in 2012, Visiting Senior Scholar at Cambridge in 2019, and Visiting Professor at Oxford in 2019.  His passion and knowledge of Arctic geology served as inspiration for a short story by Margaret Atwood (“Stone Mattress”), and his innovative work led to the publication of the circumpolar “Geological Map of the Arctic” in 2011, the “Tectonic Map of Arctic Canada” in 2015, the Geological Survey of Canada’s first-ever geological maps in Inuktitut in 2015 and 2016, the “Tectonic Map of the Arctic” in 2019, and the forthcoming “Geology of Canada – North of 60” and Canada in 3D Web App in 2021.

Marc lives in Ottawa, Ontario, with his wife Dr. Janet King and is presently Senior Emeritus Scientist at the Geological Survey of Canada. 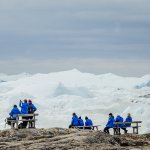 Into the Northwest Passage: 4 billion years of Earth history