Join Dame Professor Alison Richard at Heffers Cambridge, as she talks about her new book, The Sloth Lemur's Song: Madagascar from the Deep Present to the Uncertain Present.

The book provides a moving account of Madagascar told by a researcher who has spent over fifty years investigating the mysteries of this remarkable island.

Madagascar is a place of change.  A biodiversity hotspot and the fourth largest island on the planet, it has been home to a spectacular parade of animals, from giant flightless birds and giant tortoises, to agile lemurs leaping through the treetops.  Some species live on; many have vanished in the distant or recent past.  Over vast stretches of time, Madagascar’s forests have expanded and contracted in response to shifting climates, and the hand of people is clear in changes during the last thousand years or so.  Today, Madagascar is a microcosm of global trends.  What happens there in the decades ahead, can perhaps, suggest ways to help turn the tide on the environmental crisis now sweeping the world.

The Sloth Lemur’s Song is a far-reaching account of Madagascar’s past and present, told by Dame Professor Richard, who has immersed herself in research and conservation activities with village communities on the island for nearly fifty years. Alison Richard accompanies the reader on a journey through space and time—from Madagascar’s ancient origins as a landlocked region of Gondwana and its emergence as an island to the modern-day developments that make the survival of its array of plants and animals increasingly uncertain. Weaving together scientific evidence with Richard’s own experiences and exploring the power of stories to shape our understanding of events, this book captures the magic as well as the tensions that swirl around this island nation.

‘Full of wonder and forensic intelligence The Sloth Lemur’s Song is a love song to the astonishing evolution of Madagascar. It’s a fascinating journey from the island’s origins to the complex tensions of the present day, with Alison Richard the most considerate and engaging of guides.’ 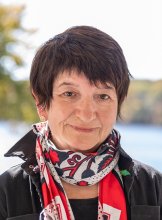 Alison Richard is the Crosby Professor of the Human Environment emerita and senior research scientist at Yale University, widely known for her work and writings on the evolution of complex social systems among primates.

She previously served as the first full-time female Vice Chancellor of the University of Cambridge, and in 2010 she was awarded a DBE (Dame Commander of the British Empire) for her services to higher education. In 2005 she was a guest on BBC Radio 4’s Desert Island Discs.