Somewhere Near to History: The Wartime Diaries of Reginald Hibbert, SOE Officer in Albania 1943-1944 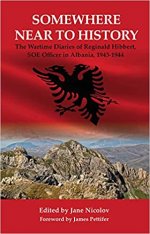 In July 1943, a twenty-one-year-old British officer, Reg Hibbert, answered a call inviting volunteers for mysterious ‘parachute duties’. The call was part of a recruitment drive by Special Operations Executive, SOE, to attract likely young officers for clandestine work in the German-occupied Balkans. By December of that year, he had been parachuted into the centre of British efforts to encourage armed resistance in northern Albania. Many of the British officers sent there sensed that they were part of history in the making in this remote and extraordinary world where different groups were both defying the occupying Axis powers and competing to determine the postwar future of their homeland. Although strictly forbidden, a few kept diaries of their lives in the field. Hibbert’s is the first of those secret diaries to be published. It is a personal account of fortitude describing how those young officers lived embedded with local Partisan organisations, moving from safe house to safe house, entirely reliant on the goodwill of the local people whose language they did not speak. They endured harsh mountain winters and the fierce heat of Balkan summers. Travelling on foot or horseback through some of Europe’s wildest terrain, their existence was one of constant uncertainty. Some lost their lives.

All were permanently changed by the experience. The pages of Hibbert’s diary are peopled with figures who are now part of Albania’s history and myth, many of whose lives ended in tragedy or exile after the communist Partisan victory in 1944. It is also a very human story, recording each day of Hibbert’s life for nearly a year: waiting for planes to drop supplies and weapons, raising a wolf cub on condensed milk, drinking the local firewater, tending wounded Partisans and struggling with sickness.

Britain’s role in hastening the end of the old order in Albania and the ensuing communist regime has long been a matter of controversy. Hibbert’s diary provides a rare and fascinating account of the situation on the ground as it evolved over the critical months before the German withdrawal.

Jane Nicolov has edited the diary and provides an introduction based on research and familiarity with her father’s experience in Albania. She is a graduate of Newnham College, Cambridge and has an MA from Birkbeck College, University of London.