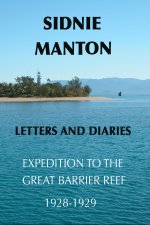 Sidnie Manton was a woman of great determination and academic brilliance. At the age of 26 she became a member of the Great Barrier Reef Expedition. This was the first such scientific study of a coral reef anywhere in the world: an eminent and intrepid group of biologists, geographers and oceanographers examined the structure and ecology of the surrounding reef. They were based on Low Isle near Port Douglas but also sailed small boats to study nearby small islands and the mouth of the Daintree River, often sleeping on board or setting up tents. Her main role was as a zoologist studying the growth of corals and the breeding of reef animals.

She used a primitive diving helmet to examine the reef. This resembled a galvanised dustbin with a window on the front and relied on another member of the team being in a small boat and pumping air down a long tube while she explored. She was armed with a bucket and hammer to gather samples and tied round her waist with string was a collection of useful things including a special pencil to make notes on a tablet of opal glass.

She researched first on Tasmania, studying Anaspides (a crustacean extinct in the rest of the world), before travelling on to join the rest of the Expedition on Low Isle where the scientists lived and had established their laboratories. They were very isolated relying on weekly deliveries of food and post. They communicated in emergencies by flashing a morse lamp from the top of the light house at night or by heliography in sunlight.

She wrote lively letters home and kept a diary recording her journeys and life for nine months as she travelled through the Suez Canal and across the world on a grand ocean liner S.S. Mooltan, then a series of trains, small boats, postbus, by horse and on foot. She had numerous packing cases with her containing 3 hundredweight of scientific equipment, photographic gear including dark room equipment as well as her own belongings. Her letters describe everything from life on a stately ocean liner to living on a sandy island in a coral sea. She reveals her thoughts on other passengers while knitting many socks for her father on the outward journey, and reassures her parents that when diving she was being careful not to put her foot in a giant clam or on a poisonous spiny sea urchin and she adds the useful advice that if you meet a shark the correct technique, if he starts to eat you, is to “put your thumbs in his eyes and he goes off with all speed!”

The diaries describe her life as a scientist and then her return journey from Australia via the East Indies in which she spent 6 weeks travelling through Bali, Java and Sumatra to Penang where she caught the SS Kashmir back to Marseilles.