Midnight in the Kant Hotel: Art in Present Times 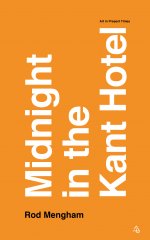 Midnight in the Kant Hotel is an absorbing account of contemporary art, composed over twenty years. The essays revisit the same artists as they develop, following them in time, changing perspectives as he, and they, develop.

Mengham is a significant curator, organising exhibitions: ‘There is no more productive engagement with someone else’s artworks than finding the right way to show it, since artworks are always direct statements or questions about articulations of space, and the curator’s job obviously is to enhance such questions and statements.’ This discipline gives the writer a series of uniquely privileged perspectives, touching, lifting, moving and re-moving the objects: ‘nothing compares to living with art’.
It was his time teaching in Eastern Europe that alerted Mengham to the urgency of some of the best contemporary art, the gulf between contemporary Western European work and that being made in countries that had belonged to the Soviet Bloc, and the changing attitudes to tradition. The opening essays consider some of these contrasts and contradictions, how contemporary art was affecting our physical and ideological perception of the world. The book opens with thematic essays: what is domestic space? what does the atrocity exhibition tell us? what is the refugee aesthetic? -- ‘transition as the only permanent state’? Film and photography are important element in our redefinitions, installations too, and how do art and language complement and undermine one another?

Essays on particular artists follow, including Marc Atkins, Stephen Chambers, Jake and Dinos Chapman, Tony Cragg, John Gibbons, Antony Gormley, Damien Hirst, Ilya and Emilia Kabakov, Anselm Kiefer, Albert Oehlen, Laura Owens, Marc Quinn, Doris Salcedo, Agnes Thurnauer, Koen Vanmechelen and Alison Wilding. Behind all the essays is the evolving perception and response of the curator-critic who, living with the work, shares with us an intimate response a detached ‘in and out’ critic would miss. It is as though we are in dialogue with the work, rather than with the artist. ‘Ye shall know them by their acts.’