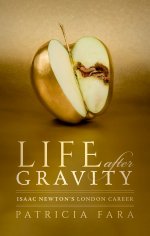 Isaac Newton is celebrated throughout the world as a great scientific genius who conceived the theory of gravity. But in his early fifties, he abandoned his life as a reclusive university scholar to spend three decades in London, a long period of metropolitan activity that is often overlooked. Enmeshed in Enlightenment politics and social affairs, Newton participated in the linked spheres of early science and imperialist capitalism. Instead of the quiet cloisters and dark libraries of Cambridge’s all-male world, he now moved in fashionable London society, which was characterised by patronage relationships, sexual intrigues and ruthless ambition.

Uniquely, this truly interdisciplinary book reveals Newton’s life as a cosmopolitan gentleman by focusing on a Hogarth painting of an elite Hanoverian drawing room. Gazing down from the mantelpiece, a bust of Newton looms over an aristocratic audience watching their children perform a play about European colonialism and the search for gold. Packed with Newtonian imagery, this conversation piece depicts the privileged, exploitative life in which this eminent Enlightenment figure engaged.

Knighted by Queen Anne, and a close ally of influential Whig politicians, Newton occupied a powerful position as President of London’s Royal Society. He also became Master of the Mint, responsible for the nation’s money at a time of financial crisis, and himself making and losing small fortunes on the stock market. A major investor in the East India Company, Newton benefited from the global trading networks that relied on selling African captives to wealthy plantation owners in the Americas, and was responsible for monitoring the import of African gold to be melted down for English guineas.

Patricia Fara is a Fellow of Clare College, Cambridge. She lectures in the history of science.