Leadership - A Life of Diplomacy 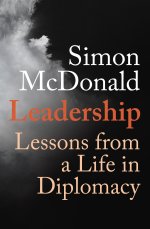 When Abraham Lincoln said, 'You can be anything you want to be,' Americans, and eventually everybody everywhere, lifted their sights. Nowadays anybody can aspire to be a leader, and nearly everybody has to lead sometimes. In his first book, Simon McDonald assumes that thinking about leadership before you lead helps you to lead better. No matter the circumstances in which we might be called to lead - be it at work, on the sports field, or in the community - the example of top leaders in politics and public service (both their successes and shortcomings) can help you figure out your own approach. Over nearly four decades in HM Diplomatic Service, Simon worked for four permanent under-secretaries and a dozen senior ambassadors before becoming permanent under-secretary himself and leading the Service (which has over 14,000 staff in 270 countries worldwide) for five years. He also worked directly for six foreign secretaries and saw five prime ministers work at close quarters. Observing these people undertaking the most important and often the most difficult work in the country, Simon saw the behaviours which helped them achieve their objectives, and those which hindered them. He then had the chance to try to apply that learning. In a closing chapter that considers the future of leadership in the UK, Simon McDonald makes a compelling case for the reform of the monarchy, the cabinet, civil service and, in particular, the House of Lords, of which he has been a member since 2021. Leadership of the United Kingdom is being debated as never before. This book is a clear-sighted and insightful contribution to that debate.

Lord McDonald worked for nearly four decades in the British Diplomatic Service for over 4 decades with a variety of experiences beyond its immediate parameters. He was the head of the Diplomatic Service, and is currently Master of Christ’s College, Cambridge.