Is That Really True, Sir?: A Life of Colour and Improbable Events 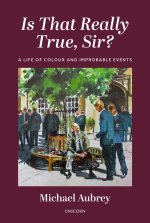 In Is That Really True, Sir?, the artist, barrister, schoolmaster, musician, journalist and explorer Michael Aubrey negotiates a succession of improbable events and narrow escapes. Starting with a vivid account of his wartime childhood, Aubrey shares the joys, hazards, surprises and often hilarious disasters of his colourful experiences in many countries, encountering a range of unusual people along the way. With a comic lightness of touch, he revels in life's absurdities at the same time as celebrating the beauty and harmony of the various worlds which he has inhabited. The memoir is lavishly illustrated, including over eighty of the author's vibrant watercolours. His acute eye for the ridiculous, keen observation of character, lyrical accounts of unfamiliar places and illuminating insights make this a joyous book, one to lift the spirits even on the dullest of days.

Michael Aubrey was born in 1940 and educated in York, Cambridge and London. He practised as a barrister and journalist in London before returning to Cambridgeto teach Law and, simultaneously, read English. After teaching in UK, India and Australia, he taught English at Oundle for twenty-five years before retiring in 1995 inorder to paint full time. As a watercolour artist his work is widely collected. He has had over thirty soloexhibitions in London, Paris, Sydney and other capital cities, some organised by theBritish Council. He is also a keen musician, playing the bassoon in orchestras andchamber ensembles. He has led an unconventional life of diverse, often bizarre experiences. These includeworking his way round America in the 1960s, famine relief work in Bihar, explorationin Papua New Guinea and adventures in pre-revolutionary Persia and Burma.