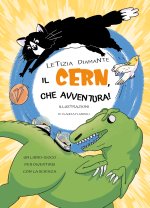 This is the Italian version of the only game-book (similar to a "choose-your-own-adventure book") set at CERN, which was published in English as Your adventures at CERN by World Scientific Publisher. It will be translated in other languages in the future. As soon as you open this book, YOU become the main character! You will be catapulted to CERN, one of the most famous laboratories in the world ― a real scientific wonderland of underground tunnels, massive experiments and technological marvels.

You can choose to play the role of a researcher, a student or a tourist, but keep your eyes open for a threatening dinosaur... Is it coming from the nearby Jura Mountains, the same place that gave Jurassic its name?

Prepare yourself for a rather bizarre adventure filled with loads of brain-tickling facts about particles and science wonders. Unfold the story, explore the unsolved mysteries of the Universe, and most importantly, have fun with the games and quizzes!

Are you ready to face the huge prehistoric beast and discover the secrets of tiny particles?