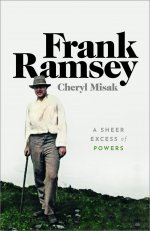 Frank Ramsey was 26 when he died.  If we include his undergraduate years, he was an academic for just 10 years and yet, despite this, he made indelible marks on up to seven disciplines, depending on how you count: philosophy, economics, pure mathematics, mathematical logic, the foundations of mathematics, probability theory, and decision theory. Keynes deferred to him; he was the only philosopher whom Wittgenstein treated as an equal. Had he lived, he might have become recognised as the most brilliant thinker of the twentieth century.

Beyond his scholarship, Ramsey lived a fascinating life.  In the 1920s, sent to Vienna for psychoanalysis, he was treated by one of Freud’s students. He was a member of the Apostles, the secret and elite Cambridge discussion society, and he was part of the Bloomsbury set of writers and artists.  His friends included Lionel Penrose, who went on to become the found of modern British genetics, Kingsley Martin, editor of the New Statesman, and Max Newman, a leading Second World War code-breaker. Misak sheds light on the lives of these and many other figures in British modern intellectual history through their intersections with Ramsey’s life.

So why has no full intellectual biography of Ramsey already been written?  Perhaps, suggests Cheryl Misak, it’s something to do with the fact that many of the topics and problems he pursued will seem impenetrable to all but a small number of specialists, and their range is staggering.  But in her insightful and comprehensive new book, she seeks to rectify this.  Drawing on a wealth of existing and new archive material, interviews and the expertise of those with a deeper knowledge of some of Ramsey’s theories, she tells the full story of this genial, open and modest man’s short but extraordinary life in an engaging and highly-readable way.