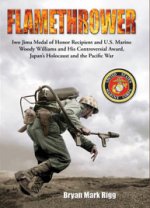 Late in the Pacific War, as Americans were fighting their way to the home islands of the Japanese Empire, one of the fiercest battles of World War II was raging. The Japanese had created, perhaps, the best defended area anywhere on an island called Iwo Jima. Days into the bloody battle, casualties were high on both sides. United States Marines were taking an awful pounding out in the open from enemy-fortified positions.

Imperial Japanese soldiers in pillboxes and bunkers knew that the greatest danger they faced was from a flamethrower if it could get near enough to hit them. Imagine a little guy strapping on a highly flammable 70-pound weapon, instantly drawing heavy enemy fire as he maneuvered close enough with a small team of Leathernecks to destroy a pillbox. Woody Williams did just that on the hellishly hot and sulfurous volcanic island of Iwo Jima, destroying Japanese emplacements against dire odds. He, along with numerous comrades, did it again and again, taking out hundreds of fortifications which had stalled their regiment’s advance to secure the islands airfields.

The capture of Iwo Jima helped the powerful new B-29s have P-51 fighter-plane escorts to help the bombers pound Japan into submission. Iwo actually was a backup landing zone for the Enola Gay if she had difficulties delivering her atomic bomb on 6 August, 1945, at Hiroshima - a bomb American leaders hoped would bring Hirohito to his knees, begging for surrender terms so World War II would stop.

Accomplished military historian Bryan Mark Rigg reconstructs Woody Williams’ remarkable story, from his youth on a dairy farm in West Virginia to his experiences as a Marine in Guadalcanal, Guam, and Iwo Jima. Using never-before-known documents and interviews, Rigg brings out new information about the Pacific War unknown until now. Rigg enables the listener to better appreciate the brave marines and their heroics.