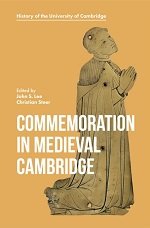 The people of medieval Cambridge chose to be remembered after their deaths in a variety of ways - through prayers, Masses and charitable acts, and by tomb monuments, liturgical furnishings and other gifts. The colleges of the university, alongside their educational role, arranged commemorative services for their founders, fellows and benefactors. Together with the town's parish churches and religious houses, the colleges provided intercessory services and resting places for the dead.

This collection explores how the myriad of commemorative enterprises complemented and competed as locations where the living and the dead from "town and gown" could meet. Contributors analyse the commemorative practices of the Franciscan friars, the colleges of Corpus Christi, Trinity Hall and King's, and within Lady Margaret Beaufort's Cambridge household; the depictions of academic and legal dress on memorial brasses, and the use and survival of these brasses. The volume highlights, for the first time, the role of the medieval university colleges within the family of commemorative institutions; in offering a new and broader view of commemoration across an urban environment, it also provides a rich case-study for scholars of the medieval Church, town, and university.