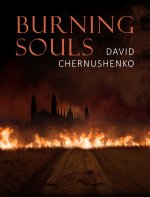 A climate breakdown thriller. Burning Souls is a dramatic tale of courage and friendship in a time of political turmoil and ecological collapse.

Long time best friends Simone, Sagan, Jenny and Jiro learned of the predatory practices driving climate breakdown and social collapse, in a time and place when they could dream of making a difference.

But as they confront a world where change frequently meets resistance and backlash, they are called on to decide what matters to them most: loyalty, courage, love, integrity, speaking the truth...and saving humanity from its own destruction.

The stakes are high, and civilized society hangs in the balance. As events spiral out of their control, how much are they each willing to sacrifice to save it?

In late 2018, American scientist Sagan Cleveland is invited to give a clarion call to the world about climate breakdown. Knowing this may be his last chance, and likely the last chance for humanity, he must tell it like it is. Like he always has. Will anyone listen this time?

Jiro Ebitsubo knew that Japan's nuclear industry and politicians could not be trusted to place public safety first. But he never expected their acts of deception to lead to a nuclear disaster that would wipe away his family home. Could he save others from that same fate?

Jenny Fung never set out to be the corporate dragon lady behind the best power storage systems on the planet. Her dream of powering rural villages in Malaysia and lifting people out of poverty was forgotten, though, as opportunity and the thrill of success take her on a wild ride--until the devastating crash. Can she rediscover her passion and still make the world a better place, or had she left it too late?

Canadian journalist Simone Cohen has seen her world fracture and collapse, far faster than anyone predicted. Faster even than the facts and trends she worked so hard to convey indicated, over her decades as a truth-to-power journalist. In deep cover now, in the dry, hot and dangerous south of France of 2025, she is far from the people she loves--or loved--wondering who is still alive and whether all her efforts and theirs made any difference. Who will save her? Is there anything left to save?