A Long Walk with Lord Conway 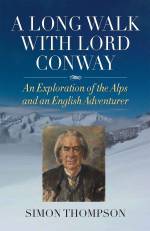 In 1894, Martin Conway (Trinity 1875) became the first man to walk the Alps ‘from end to end’ when he completed a 1,000-mile journey from the Col de Tende in Italy to the summit of the Ankogel in Austria. On a midsummer’s morning, nearly 120 years later, Simon Thompson followed in his footsteps, setting out to explore both the mountains and the man.

A charming rogue who led a ‘fantastically eventful’ life, according to The Times, Conway was a climber and pioneering explorer of the Himalaya, Spitsbergen, the Andes and Patagonia; a serial pursuer of American heiresses; an historian, collector and Slade Professor of Fine Art at Cambridge; a company director and stock market promoter of dubious gold mines and non-existent rubber forests; the founder of the Imperial War Museum; the first foreigner to see the Russian crown jewels after the revolution; a successful journalist and author of over thirty books; a liberal politician; and a conservative MP. Shortly before he died, he was created 1st Baron Conway of Allington.

In A Long Walk with Lord Conway, Simon Thompson retraces Conway’s long journey over the peaks, passes and glaciers of the Alps and rediscovers the life of a complex and remarkable English adventurer.